For its first ATMA Classique recording, the a cappella vocal quartet Quartom goes to the opera. Quartom performs arias from such well known operas as Rigoletto, Carmen, Tannhaüser, and La belle Hélène in arrangements made specifically for this album.

The Quartom vocal quartet was formed in April 2008. With a wide range of experience and musical education — from conducting children’s choirs to a Master’s in music — its members perform a rich and varied repertoire on disc and in concert. Last spring Quartom made its first European tour to cities in Belgium and France. Recently the quartet visited several cities in Quebec, and performed its show La bonne nouvelle selon Quartom more than 40 times. Quartom sang the national anthems at the Bell Centre before a Canadiens hockey game, and performed in Piaf a 100 ans – Vive la môme at the Francofolies de Montréal.

There are no reviews yet.

Be the first to review “Acte III” Cancel reply 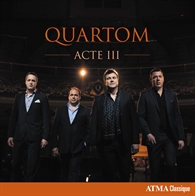