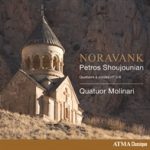 The 100th anniversary of the Armenian genocide, an internationally acknowledged tragedy in which more than one and a half million Armenians died, was commemorated in 2015. To mark this anniversary and draw attention to this tragedy, Canadian composer Petros Shoujounian has written four string quartets, which are performed on this ATMA recording by the Quatuor Molinari. All of the music is based on Armenian liturgical chants.

Each movement of these string quartets is named after a river in Armenia. The symbolism is intentional: water is essential to life, and rivers are the veins of a country, just as faith nourishes and sustains the existence of creative and forward-looking people.

There are no reviews yet.

Be the first to review “Noravank” Cancel reply 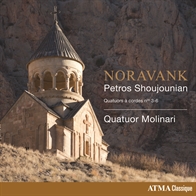